Unboxing: This is ‘The history of Marvel Studios’, the most complete book in the Marvel Cinematic Universe

Unboxing This is The history of Marvel Studios the most

Unboxing: This is ‘The history of Marvel Studios’, the most complete book in the Marvel Cinematic Universe
is the headline of the news that the author of WTM News has collected this article. Stay tuned to WTM News to stay up to date with the latest news on this topic. We ask you to follow us on social networks.

May 2, 2008. U.S. theaters receive Jon Favreau’s ‘Iron Man’, with Robert Downey Jr. as Tony Stark. We had already seen a lot of movies that brought superheroes from comics to the big screen. But this was different. ‘Iron Man’ wanted to be the first stone of a crazy plan that would encompass different characters with their own films, which would end up joining in film events.

April 26, 2019. ‘Avengers: Endgame’, the final battle of the Marvel heroes against the titan Thanos, opens in North America. It becomes the highest grossing film in history and consolidates the Marvel Cinematic Universe as the most successful franchise in recent years (it would also become the highest grossing saga in history). The plan, which seemed practically impossible, closed its first major stage with critical and box office success and with a legion of fans. Along the way there are a lot of triumphs, some setbacks, but a waste of creativity both in front of and behind the cameras.

On October 5, ‘The history of Marvel Studios’ finally goes on sale in Spain. Planeta Cómic have been in charge of translating into Spanish and distributing this two-volume encyclopedia that reviews the entire history of the UCM Infinity Saga, that is, from phases 1 to 3. From ‘Iron Man’ to ‘Avengers: Endgame ‘ (and ‘Spider-Man: Far From Home’). Tara Bennett and Paul Terry are the authors of these 512 pages in which we discover how we got to the making of ‘Iron Man,’ Kevin Feige’s role as the overlord of this master plan, and every milestone, film, actor and record that was shaping the incredible history of this franchise. Also some brushstrokes of what would be to come after the defeat of Thanos.

Being an official book, In its pages we will find testimonies and statements from all the protagonists of the saga, starting with a prologue signed by Kevin Feige himself and culminating with an epilogue written by Robert Downey Jr., the actor who started it all. Filmmakers, technicians, producers and actors offer their testimonies and anecdotes so that we can get a picture of what it was like to participate in the creation of the UCM. The book does not forget either Stan Lee or Chadwick Boseman, to whom it dedicates a section in the last pages. The two volumes are full of exclusive photos, storyboards, concept arts and many graphic documents that are a real treasure. 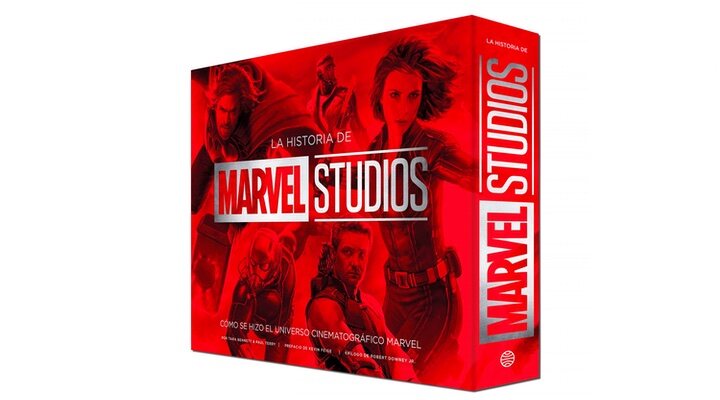 In our unboxing we show what ‘The history of Marvel Studios’ is like on the outside and on the inside, which goes on sale on October 5 at a recommended price of 100 euros. Now that we are immersed in a tremendously prolific phase of the MCU, what better time to remember how it all began.