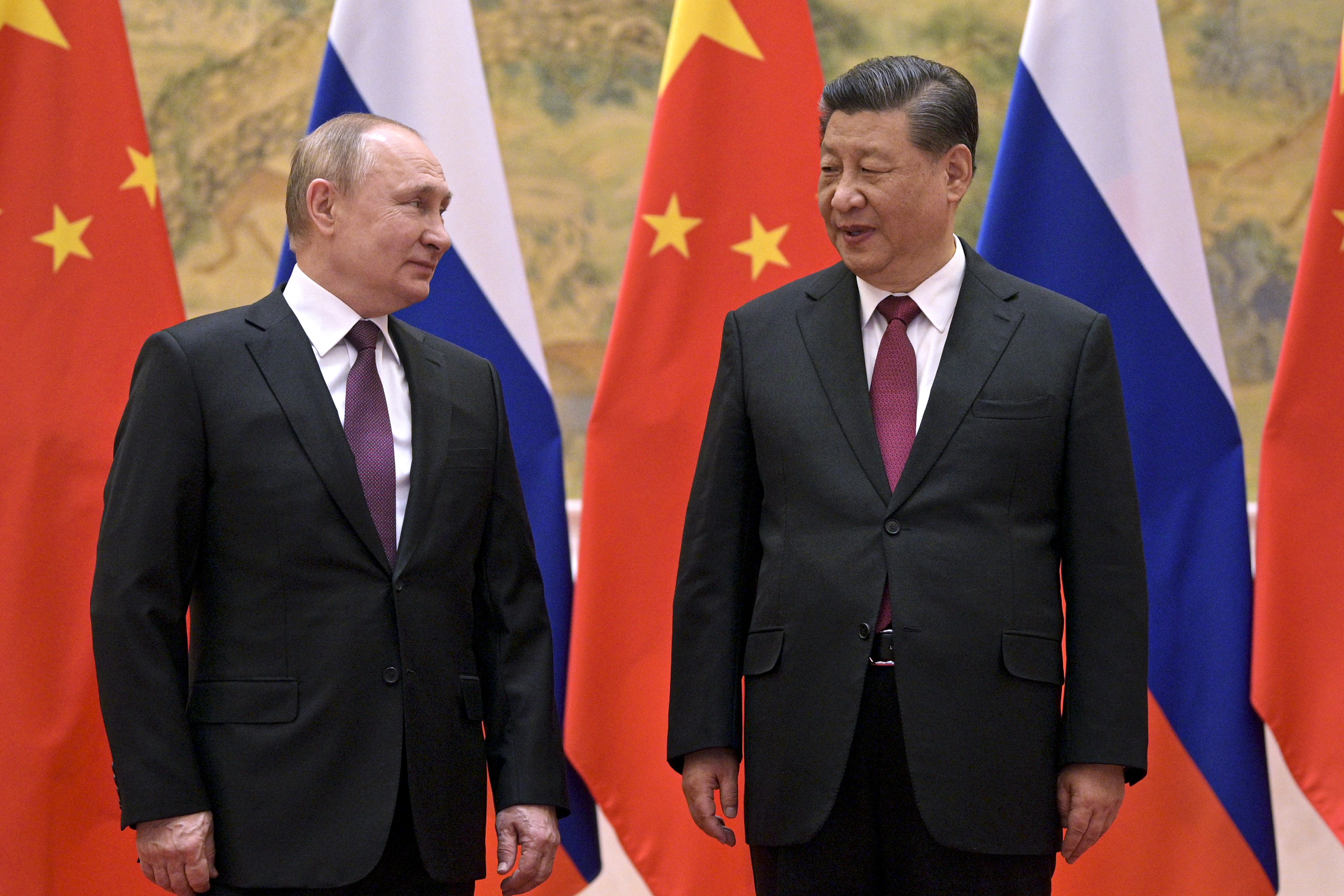 The international community is trying, so far without success, the possibility of seeking a negotiated solution that would put an end to Russia’s war against Ukraine. Both in NATO and in the European Union it is recognized that the offers of mediation have little sign of prospering while the Russian president, Vladimir Putin, continues to intensify his deadly attacks to try to break the unexpected resistance of the Ukrainian forces.

Potential negotiators range from Israel to Finland and even former German chancellor Gerhard Schröder, who is in the pay of Russian gas company Gazprom, has offered his services. But most of the sources consulted agree that, when the time comes to sit down and talk, China will be the interlocutor with the most ascendancy to be accepted by Putin and by the Ukrainian president, Volodímir Zelensky. Turkey has also put itself forward as a possible arbitrator, but its NATO membership and clashes with Moscow on other fronts reduce its chances of success.

Rosa Balfour, director of Carnegie Europe, believes that “at the moment, the conditions for starting a negotiation are not even clear.” And she points out that “any future negotiations will depend entirely on the situation on the ground: on whether the Zelensky government manages to stay in power or is overthrown by Russia; of the territory that Moscow comes to control; and how far the confrontation escalates.”

Balfour warns that, regardless of the arbitrator chosen, the bridges to Moscow have little travel at the moment. “So far, everything indicates that Putin does not want to negotiate in good faith,” says the director of Carnegie Europe. “More like he’s buying time for a second round after the first, which was supposed to be a quick take on Kiev, didn’t go as he planned.”

“In the short term there is no possibility of mediation, unless China is encouraged to assume that role,” agrees a senior EU official. And NATO sources add that “it would be convenient for China to act as a mediator to improve its relationship with the US and demonstrate that it is a responsible member of the international community.”

The proposal of a possible Chinese mediation gained strength after, on the 5th, the Ukrainian Foreign Minister, Dmitro Kuleba, declared having received guarantees that China “wants this war to end”. Kuleba had spoken a week earlier with Chinese Foreign Minister Wang Yi, whom he had asked for Beijing’s intercession. Since then, other leaders have been open to the idea. From the head of European diplomacy, Josep Borrell, to the Australian Prime Minister, Scott Morrison.

“China has the potential to talk to Moscow given their relationship, and we would like China to use its influence to push for a ceasefire and get Russia to stop the brutal and unprecedented bombing and killing of civilians in Ukraine,” said a spokesman for the European Commission.

In words, Xi has been open to it: the idea of ​​a mediating China projects the image he wants to promote, that of a peace-loving global power and defender of international cooperation. But he would prefer not to act, unless a political resolution to the conflict is close or the effect of the war on the economy is of such magnitude that he sees no other choice. For now, Beijing has limited itself to a small shipment of humanitarian aid to Ukraine, for five million yuan or 717,000 euros.

“China lacks experience or a track record of success in international mediation, especially in conflicts of this magnitude,” says Alexander Gabuev of the Carnegie Center in Moscow. Above all, his interests are on the side of Russia, a key partner in dealing with what he perceives to be US attempts to curb his global influence and whose economy is complementary to his own. Minister Wang underlined this at a press conference on Monday: the relationship with Moscow is “solid as a rock” and the collaboration will continue to deepen “however dark the situation may be.”

So “what would Xi gain by trying to push where Macron and Biden failed?” Gabuev points out. Beijing, he maintains, “will try to show that he plays an active role, perhaps Xi Jinping will have some other telephone conversation with Putin, but without doing much.”

Helena Legarda, from the German think tank Merics, believes that Beijing will also try to preserve its ties with the EU, its second largest trading partner, but without getting too involved in the conflict. “There remains some hope in Europe that China might help to find a ceasefire,” she notes. But she concludes that “the chance of China joining forces with the West to mediate is pretty low right now.” “For the Chinese leadership, this crisis is not only about the future of Ukraine. It also concerns larger questions about geopolitical competition and how China wants to position itself vis-à-vis Russia and the West now and in the future”, recalls the expert.

It is even more difficult for the Turkish president, Recep Tayyip Erdogan, although Ankara has scored a good goal by promoting the meeting held this week between the foreign ministers of Russia, Sergei Lavrov, and Ukraine, Dimitro Kuleba, in the Turkish province of Antalya. It has been the highest-level meeting held between the two countries not only since the beginning of hostilities but also in recent years: “Regardless of the result, it has been a success for Turkish diplomacy,” says a diplomat. “Honestly, we didn’t think they were going to get it,” confesses the same source.

Even before the Russian president ordered the invasion of neighboring Ukraine, Turkey had proposed meeting the leaders of both countries to find a negotiated solution to their differences. The war began, and the Turks continued to insist on proposing themselves as mediators.

Turkey has also managed to become this weekend, thanks to the Antalya Diplomatic Forum, “in the political center of the world for two days”, in words of the deputy of the European Parliament and rapporteur for Turkey Nacho Sánchez Amor. The meeting was attended by many of the international leaders involved in the current security crisis in Europe, such as the Secretary General of NATO, Jens Stoltenberg, the head of the foreign policy of the EU, Josep Borrell, or the director general of the International Atomic Energy Organization, Rafael Grossi, who discussed with the Russians and Ukrainians the state of the nuclear power plants affected by the war.

The forum has allowed many contacts: not only between Russians and Ukrainians, but also between Ukraine and NATO, Turks and Iranians, Venezuelans and the EU… all of them against the backdrop of the war in Ukraine

One of the secrets of this intense diplomatic activity is the “sympathy” and “tireless work” of the head of Turkish diplomacy, Mevlüt Çavusoglu (in office since 2015), explains a source who knows him. He is constantly on the road and in contact with his colleagues from other countries (“he is accessible through phone messages”, explained a former European minister). In Brussels itself, in the face of Erdogan’s outbursts, which generate great mistrust, the Turkish Foreign Minister has good press and various contacts since his time in the Parliamentary Assembly of the Council of Europe, of which he was vice president and president between 2007 and 2012.

Unlike Beijing, Turkey also has a certain résumé as a mediator. Ankara was on the verge of getting Syria and Israel to sign a definitive peace in 2008, a process that went to waste when Israeli forces attacked Gaza in December of that year. Ankara’s mediation has also managed to iron out differences between states of the former Yugoslavia and between Afghanistan and Pakistan.

Allied sources doubt, however, that Moscow will accept Erdogan’s intervention as a peacemaker in the conflict. “Turkey is a member of NATO and has sold many drones to Ukraine,” these sources recall. In the Ukraine crisis, Turkey has used the trick of being the only NATO country that has not supported the sanctions against Moscow, although it has sold military equipment to Ukraine and has closed access to the Black Sea to Russian military ships.

But this has not been enough to achieve a rapprochement between Moscow and Kiev: last Thursday’s negotiations in Antalya made it clear that Russia does not feel as comfortable as Ukraine in Turkey’s negotiating format. Lavrov demanded to return the contacts to Belarus, a country under the orbit of Moscow and without as many witnesses as Antalya, full of journalists and diplomats from all over the world. The Turkish government, however, continues to insist on mediating and has extended the invitation to a possible future meeting between the Russian and Ukrainian presidents.

Doubts also abound as to the possible bargaining points with Moscow that would need to be addressed to stop the war. Putin assured on February 24 that the objective of his “special military operation” is to “demilitarize and denazify Ukraine.” The Russian president added: “Our plan is not to occupy Ukrainian territory or impose anything on anyone.” And he framed the offensive in a supposed Western threat to Russia and a NATO that is ever closer to its borders. As a consequence of this expansion, Putin concluded, “an anti-Russian hostility is taking shape in territories adjacent to Russia that are, I must say, historically our land.”

The Zelensky government itself has offered after the start of the war a commitment that Ukraine will never join the Alliance, a neutrality that is compared to the status of Finland after World War II. But some analysts doubt that such an offer will appease the Kremlin tenant. “In view of the situation on the ground, the debate on neutrality is useless,” Balfour dismisses. “It is clear that Putin has used the NATO argument as an excuse,” says that analyst. And she adds that “there is no reason to believe that Putin’s ultimate goal would have been to keep Ukraine out of NATO.” And what’s more disturbing: “That means we don’t know what his ultimate goal is.”