JBOD PROMISE VTrak J5960: sustainable storage
is the headline of the news that the author of WTM News has collected this article. Stay tuned to WTM News to stay up to date with the latest news on this topic. We ask you to follow us on social networks.

Modern data centers are rapidly evolving in the fight to combat climate change and improve sustainability. The goal is to keep energy consumption levels low, as well as the carbon footprint, while processing a large volume of data, which has been and will be stored on hard drives.

For the most part, these green initiatives directly affect all areas of the data center, from technical measures such as waste heat reuse or chill cooling, to the use of sustainably produced inventory and HDD technologies.

This is where the “JBOD with green DNA” comes in, the new VTrak J5960 4U 60-Bay top-loading JBOD from PROMISE, deserving of this name in view of the Toshiba Laboratory Report that has evaluated its ecological attributes using hard drives from Toshiba.

If we focus on the precise measurement of the power consumption used by the JBOD, it is shown that, with the device powered on, without disks, and with the SAS connection to the host active, the consumption is 100W. While, with disks and a maximum starting power it increases to 850W. For its part, the JBOD with raw disks on Idle HBA drops to 305W.

It is worth noting that the VTrak J5960 has a default setting that puts all SAS disks to Idle state when they are not accessed for approximately 2 minutes. Also, it takes about 1200ms for the idle HDD to go from Idle to Active.

Based on this, about 100W for a diskless dual-IOM JBOD is an excellent power value. And it is that, if the IOMs are individual, the value drops to 80W in the same conditions, although the typical range in JBODs with dual IOM is between 200-300W.

On the other hand, a high lambda factor of 0.96 shows that the ratio of reactive power generated by the power supplies is very low. And it is that, the higher (better) the lambda factor is, the lower the reactive energy will be. Well, this type of energy does not cost and does not generate heat

Lastly, the 640W peak power figures prove the JBOD’s green credentials. The temperature difference of less than 10°C between the hottest and the coldest unit with a maximum temperature of less than 14°C above ambient temperature, supports the reliability and long life of the HDDs.

Performance measurements in the Toshiba Lab 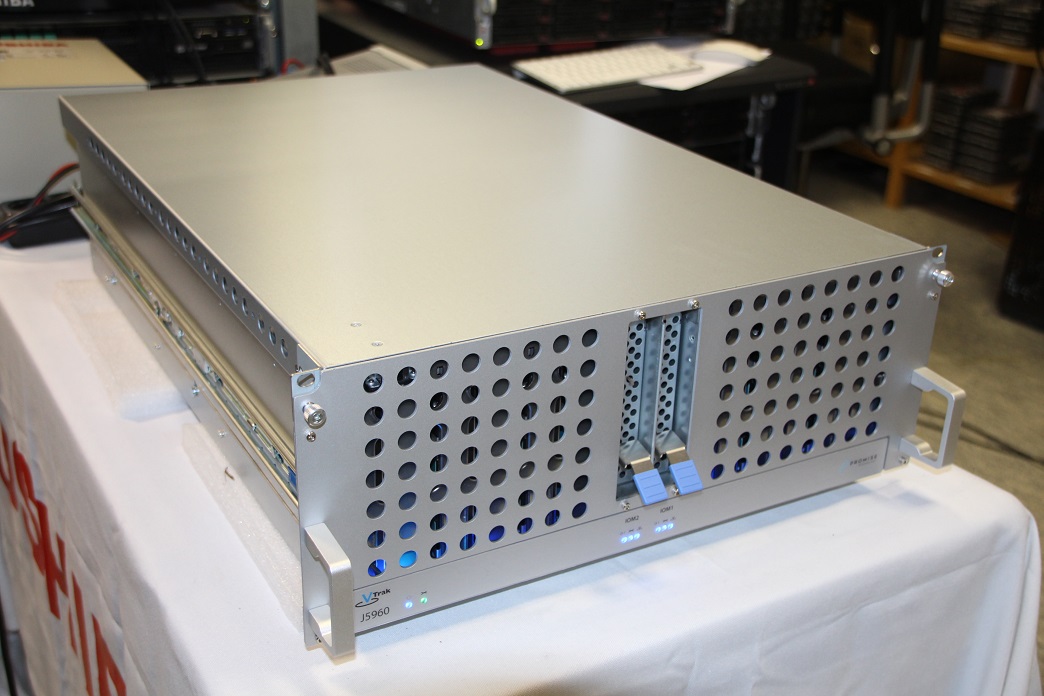 For testing with SAS drives, both JBOD IOMs have been connected with two mini-SAS-HD cables to the 4 mini-SAS-HD ports of the HBA 6e and to the RAID controller. This configuration provides a theoretical JBOD/HDD access bandwidth of 4x 4.8GB/s = 19.2GB/s, but requires adding paths with the multipath facility.

For systems that require high sequential performance, such as 100Gbit/s network bandwidth and 12.5GB/s storage bandwidth, the recommendation to follow is to use nearline SAS enterprise capacity HDDs. Toshiba MG series in dual IOM configurations.

Whereas, if the network bandwidth is 25Gbit/s or less and higher capacity is the primary goal, nearline SATA drives can also be used in single IOM configurations as storage bandwidth is typically limited at 4GB/s, which again matches a network link speed of 25Gbit/s.

One PB of capacity and only 500W of consumption

PROMISE Vtrak’s VTrak J5960 is a 60-bay top-loading JBOD that is energy efficient and easy to maintain. It is the most compact model in its class with a length of only 666mm. Fully loaded with 18TB Toshiba drives, it offers a total capacity of over a PB with only around 500W of power consumption.

Ukraine gets used to living with war | International

Apps: Tools and tricks to remember the location of the car thanks to the mobile | Your Technology | The country

Building a data strategy is possible with Customer360

3 essential factors for a successful digitization