Javier Ruiz Caldera (‘Malnazidos’): “The zombie movies that we like talk about the living, not the dead”

Javier Ruiz Caldera Malnazidos The zombie movies that we like

This March 11, the new Telecinco Cinema production, ‘Malnazidos’, will hit theaters. a zombie action comedy with a most peculiar context: the Spanish civil war. Javier Ruiz Caldera and Alberto de Toro direct with four hands, who have spent a whole career collaborating together forming a director/editor combo. “Directing is a very lonely process and having a sidekick and accomplice from my lifelong films now sitting next to me in the combo has been a total help”Ruiz Caldera told us when we sat down to talk with them during the film’s promotional event in Madrid.

“We had so many actors on shot at times”adds Ruiz Caldera, “that when we said cut they seemed like zombies who came to ask us «have we done it right?», “What do we have to do?”, “Can we do it again?”… Being two of us, we shared it.” And the fact is that ‘Malnazidos’ is starring, and we are referring to the main roles, by Miki Esparbé, Aura Garrido, María Botto , Luis Callejo, Jesús Carroza, Álvaro Cervantes and Manel Llunell, but Dafnis Balduz, Francisco Reyes and Frank Feys also have a lot of weight in the film. 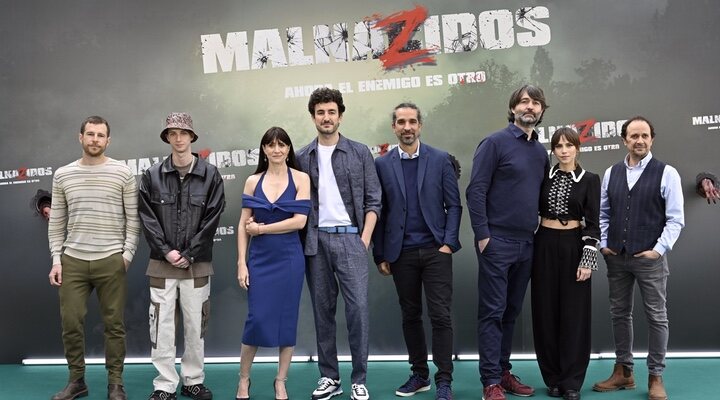 It’s clear watching ‘Malnazidos’ that the first references that come to mind would be George A. Romero’s movies, Quentin Tarantino’s ‘Inglourious Basterds’ and of course movies like ‘Nazi Zombies’ and ‘Overlord’, but What else influences you outside of gender? “John Carpenter’s Cinema”, tells us about Toro, “but also adventure films and even Spielberg films […] We had a very clear reference that was ‘Tiburón'”. Other names they mention are Harrison Ford in ‘Indiana Jones’, Bruce Willis in ‘Jungla de cristal’ or Humphrey Bogart in ‘The African Queen’, but, as Ruiz Caldera says “Carpenter is almost the father of our cinephilia and of our love for cinema and in fact in the film we have a theme composed by him that he has given us, it is a declaration of intent”.

As for the thorny political issue and the fact that ‘Malnazidos’ is committed to putting a group of Republicans and another of fascists as protagonists and teaming up, the directors tell us that the premise was already in the novel, ‘Night of the Dead of the 38’ by Manuel Martin, “What we were really interested in”says de Toro, “they were opposing characters. In ‘Assault on the 13th Precinct’ they are robbers and policemen who have to get together and we understand that the movie Carpenter made it to entertain” and sentence: “I don’t think ‘Malnazidos’ is equidistant, I think it splits both sides”.