As a first cultural symbol in early human societies, handcraft encompasses a vast array of creative activities and crafted items. A craft’s history reveals the lands from which it comes, as well as the civilization from which it came, and it could also reveal the nation’s cultural and artistic works. Especially in light of the recent world events, non-Iranians weren’t aware of these art forms, and this drove us to develop this idea. CyrusCrafts is here to represent all these art crafts in just one place, including decorative plates, minakari, ceramic crafts, pottery and much more…

The term decorative handicrafts refers to handmade products that are useful for decoration and design. Every region and area has a decorative handicraft especially decorative plates that symbolizes the culture that has passed down through the ages. They are primarily designed to improve the appearance of the environment, but that does not mean every craft is not functional. In fact, some handicrafts can serve both as functional as well as decorative purposes. Nevertheless, the design of these products makes more aesthetic sense in the environment, which makes people showcast them instead of using them, but it depends on who we are talking about. 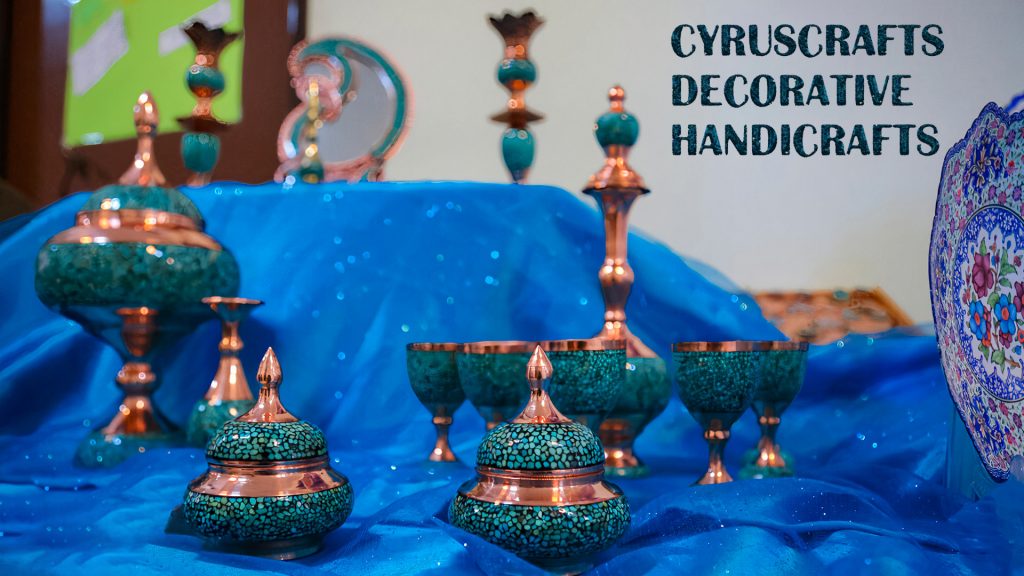 Persian Handicrafts mature by the material they are made of: Persian Metal Crafts, Persian Wooden Crafts, and Persian Pottery or Earthenware Crafts.

There is no clear path to the history of the traditional metal engraving in Iran and the documentary that explains the first use of metal, especially copper in Iran and the East dates back several thousand years BC. The art and craft of metalworking flourished in different parts of Iran toward the end of the second millennium BC and the beginning of the first millennium BC, especially along the northern and northwest coasts of the Caspian Sea. The Hasanlu Gold Cup, found in 1335 AH, is one of the most important works of this period because it depicts the gods riding chariots. 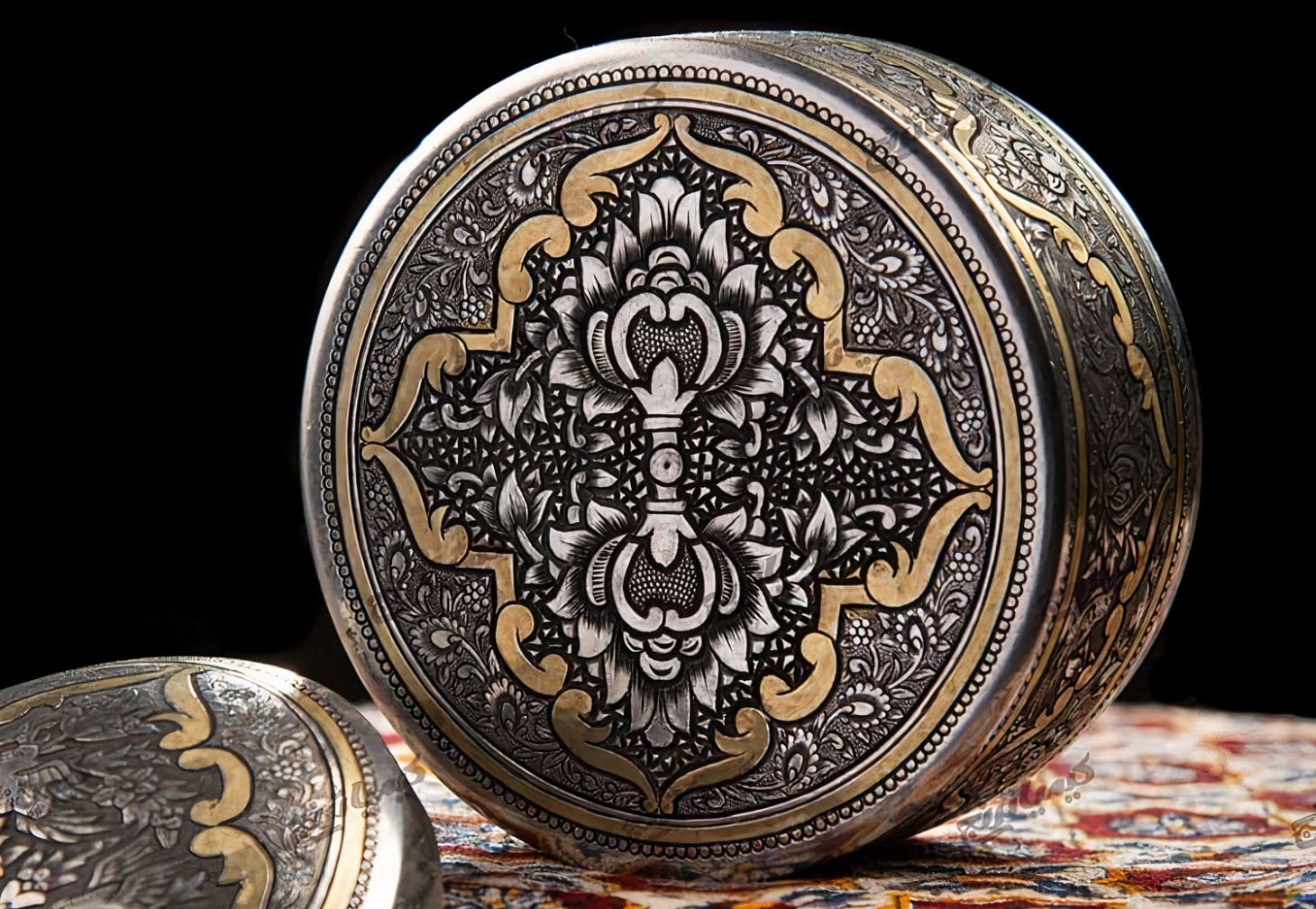 Old-style Cyruscrafts minakari  can be divided into 3 types, which will be discussed later.
The metals used in Minakari are gold, copper, silver, steel, aluminum, brass, and bronze. Among these, copper is the most commonly used metal. The metal is strong and durable.
There were so many colors and powders used in traditional Minakari that made them incredibly detailed. In modern minakari only a thin layer of color is used, and the whole thing is coated with polyester to provide additional protection.

Today’s turquoise inlay is actually a way to improve waste turquoises. Small turquoise stones are glued together and then covered with a killer spray after they have been polished. In terms of stone inlaying. In addition to writing verses from the Holy Quran and literary poems, turquoise stone is used to create calligraphic art, such as Nastaliq, Naskh, and others, although the application of turquoise varies depending on the decorative item such as vases, bowls, and every kind of plate and trays, but mostly jewelry. At CyrusCrafts’ Collection all of these products are available no matter what part of the world you are located at.q

The most popular handicraft in Iran is woodworking or wooden handicraft. It is the art of carpentry to produce flat, volumetric, decorative and functional objects from wood using different methods. The main body of wooden works of art is constructed with various carpentry and joinery methods. Later, the decoration work is performed on the surface in various ways or glued on a layer already formed. As we will be discussing two of the most popular ones in this article; Wood carving and Wood inlay.

It involves designing and carving superficial designs and patterns on wood with the desired tools based on the taste and artistic creativity of the artist. The wooden works obtained from the past confirm that wood carving is the oldest art related to wood after carpentry. The section of Cyruscrafts handicrafts includes decorative wall arts, carved plates, and vases. A wood carver mostly uses local, readily available woods like beech, maple, mulch, and boxwood; other raw materials include sealants, killers, and thinners.

Khatam’kari or wood inlay is one of the most original and striking branches of wooden crafts in Iran. This process, in addition to the taste and artistic eye of the builder, requires considerable patience, care, and time. The majority of experts believe Shiraz was the birthplace of this art-industry, but in fact, it was actually Isfahan that became the center of production and promotion of inlay thanks to the interest and attention of the kings of the Safavid dynasty.

Firstly, it is important to mention that some Iranian decorative handicrafts do not just correspond to one category and can relate to several, like minakari, which can also be applied to pottery.
By discovering examples of pottery, we have been able to determine the antiquity and background of civilization, which makes pottery one of the oldest human arts and crafts. Pottery was first discovered around 8000 BC before wheels and kilns were discovered.

About Iranian pottery: it is believed that the earliest pottery came from Xianrendong Cave, located in the Jiangxi province of China. According to scholars, the pottery is between 20,000 and 19,000 years old. Persian pottery is also considered to be among the oldest art forms in the world, which has improved greatly over the years, as today you can find and buy some of the finest Iranian pottery crafts online. CyrusCrafts Minakari is one of those websites that offers some of the finest of the finest… 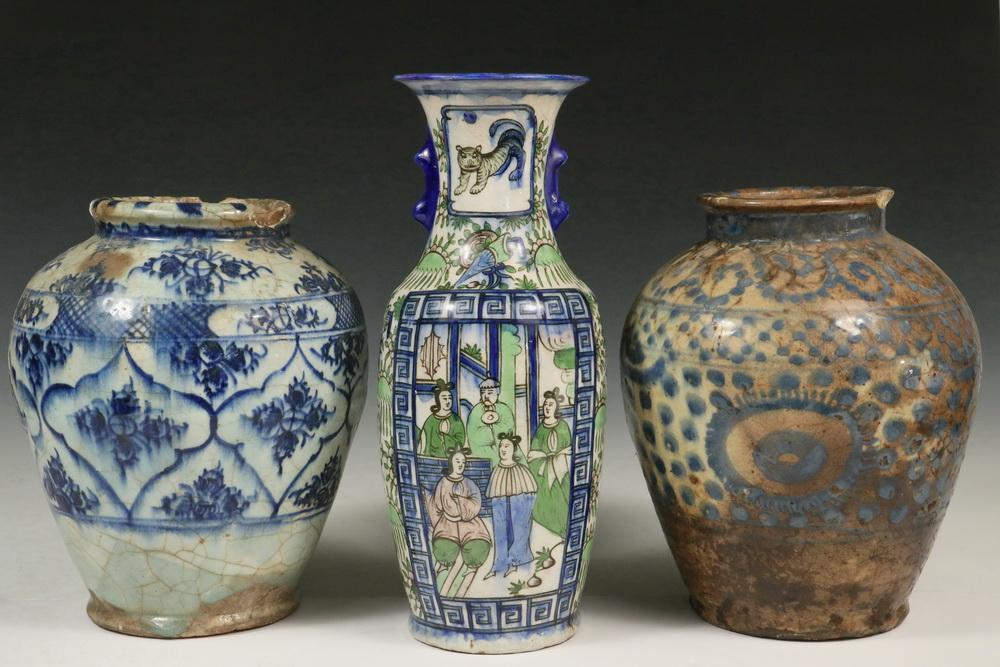 CyrusCrafts’ Collection provides a wide range of Iranian handicrafts, carpets, kilims, accessories, delicious foods with Iranian flavors, etc., We offer more than just that. We offer originality, uniqueness, and of course peace of mind. The collection we offer goes beyond the usual products that are easy to find. The purpose of CyrusCrafts is to support handicraft lovers worldwide, so you can own Iranian handicrafts no matter where you live.

This is promotional news! We are not responsible for the accuracy of the content of this news.

All pending Nord Stream: the ‘D-day’ of the European gas war | International

Begonya Ferrer: “I’ve listened to myself and there are phrases that are very sneaky”. This is how artificial voices arrive in the world of locution | Technology

3 Days in Dubai – Where to Visit in Dubai

Brief introduction of the ancient city of Rome

Begonya Ferrer: "I've listened to myself and there are phrases that are very sneaky". This is how artificial voices arrive in the world of locution | Technology