Galaxy Z Flip 4: a week with Samsung’s flagship folding | Technology
is the headline of the news that the author of WTM News has collected this article. Stay tuned to WTM News to stay up to date with the latest news on this topic. We ask you to follow us on social networks. 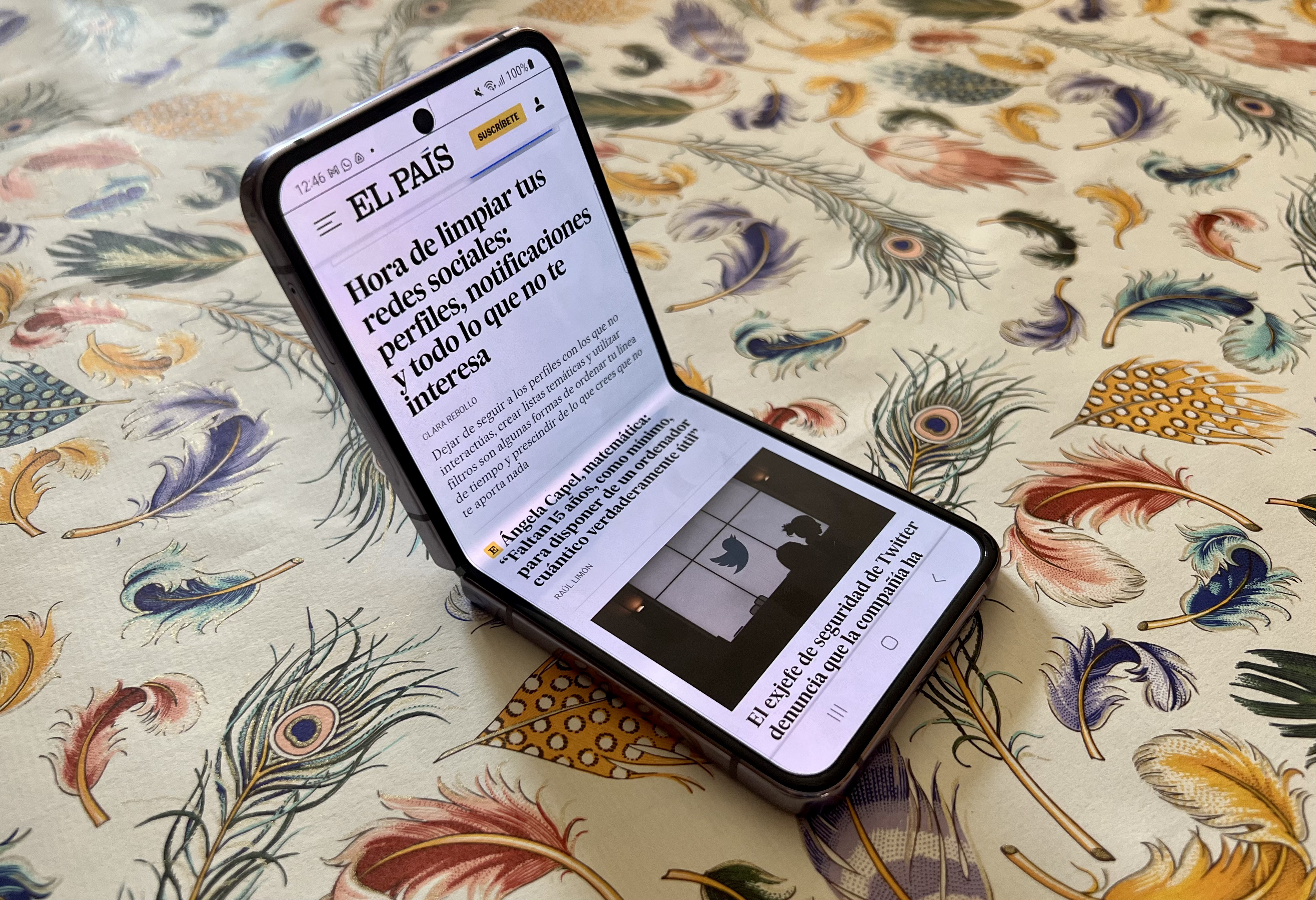 The Galaxy Z Flip is Samsung’s flagship foldable. Its sales multiplied by six from January to June 2022 compared to the same period last year, according to the South Korean brand, which has just launched the latest version of the terminal for sale. The Galaxy Z Flip 4 stands out for a subtly improved attractive design, a somewhat more ambitious battery and a rather small external screen that incorporates new functions. EL PAÍS has tested this mobile for a few days, whose benefits are paid: its price starts at 1,099 euros.

The design of Samsung’s smallest foldable is nearly identical to its predecessor, albeit with a slightly slimmer hinge and bezels. It is a terminal that, open, behaves like a traditional mobile. But it hides an incentive: it can be folded in half and stored in almost any pocket. Folded, it measures 71.9 millimeters wide, 84.9 high and 17.1 thick.

The user can perform some actions without having to open the device thanks to a 1.9-inch external screen, which for some users may be too small. In addition to checking notifications, this panel can be used to play music, manage alarms, view the calendar and take selfies with the device’s most powerful cameras. Simply press the lock button twice to activate this function and preview the image captured by the sensor. When putting the palm of the extended hand in front of the screen, a timer appears and the mobile takes a photo.

Among the main improvements of this panel, it stands out that it is now possible to reply to messages with emojis, a message written by voice dictation or some preselected responses such as “no, thanks”, “great”, “my goodness!”, “ how are you doing?” or where you are?”. Although it is a welcome improvement, on many occasions it is still necessary to open the terminal to properly reply to a message.

Samsung claims to have improved its hinge, which seems quite sturdy. The Galaxy Z Flip 4 can be unfolded with one hand with some effort, but it is more comfortable to use both. Opening it still causes a surprise effect in many users. Once unfolded, the device looks more like a traditional mobile. With one main difference: a small indentation cuts the screen in half. Although in general it does not affect the user experience noticeably, it can be seen when you run your finger over it or slightly bend the terminal and look at it from the side.

Open, the Z Flip 4 measures 71.9 millimeters wide, 165.2 high and 6.9 thick. The 6.7-inch screen is a bit long and is surrounded by small frames. Its refresh rate adapts automatically and reaches 120 Hz. This parameter refers to the number of times the screen is updated per second. Therefore, the higher it is, the smoother the experience, although it also consumes more battery. The user can choose a standard rate (of 60 Hz) to extend battery life or an adaptive rate (which reaches 120 Hz). By activating this last option, the animations and displacements are more natural and fluid.

One of the mobile’s strengths is that it can be held in an ‘L’ shape. In this way, when resting it on a surface, it becomes a camera with its built-in tripod. Something that allows the user to take photos and videos or make video calls without using their hands. In this position, Flex mode is automatically activated and the layout of some applications changes immediately. For example, when playing a YouTube video, the video is shown in the upper half of the screen and information about it and comments are shown in the lower half.

In addition to a 10-megapixel front camera, the mobile has two 12-megapixel rear sensors each: a main one that is 65% brighter and a wide-angle one. Both sensors capture sharp, highly detailed photos both day and night, albeit sometimes oversaturated. The results are good, but they are not comparable with the main smartphones high-end on the market. The images captured with portrait mode stand out. The terminal identifies edges very well, even when the background is of a similar color.

The Galaxy Z Flip 4 is compatible with 5G networks and incorporates the Qualcomm processor for the high-end Snapdragon 8+ Gen 1. In addition, it has 8 GB of RAM and 128, 256 or 512 GB of storage. The model that this newspaper has tested is the 256 GB one. Performance has been good in all cases. Although on rare occasions the device has become noticeably warm, in general, the applications work without any type of lag or delay.

Samsung, which does not include the charger in the terminal box, has improved the mobile battery. While that of the Galaxy Z Flip 3 was 3,300 mAh, that of the Z Flip 4 increases to 3,700 mAh. On a day-to-day basis, an improvement is noted in terms of autonomy. Even so, demanding users can still struggle to make it to the end of the day. The mobile has a 25W fast charge, which allows the battery to be filled in approximately one and a half hours.

Samsung’s new wireless earbuds, the Galaxy Buds 2 Pro, are now 15% smaller. In theory, they fit better in the ear to prevent rotation, for example during exercise. In general, they are quite comfortable, they do not protrude so much and they do not feel like they are going to fall off. Like most high-end headphones, they can be easily controlled with touch controls.

Its main novelty is that they have 24-bit audio support. In addition to the sound being powerful and quality, they have active noise cancellation, which can be especially useful when working in a noisy place. Samsung promises up to six hours of autonomy playing music and 18 hours with the charging case. The Galaxy Buds 2 Pro cost 239 euros.

Brenda Uliarte: The Argentine police arrest the girlfriend of the man who tried to kill Cristina Kirchner | International