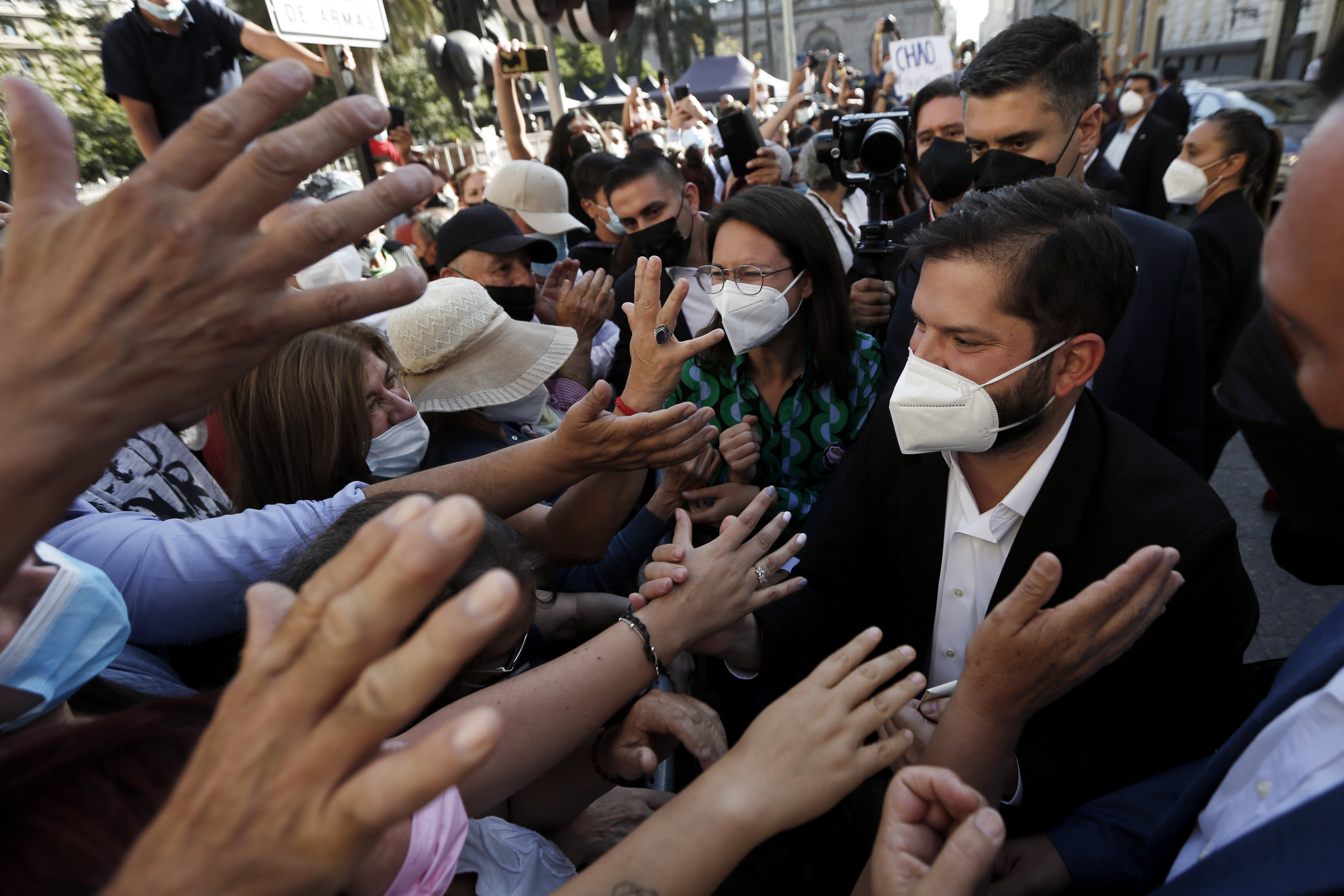 Gabriel Boric will be the new president of Chile from this Friday. And with him a new left will come to La Moneda. At only 36 years old, this leader emerged from the forge of student protests and will lead a process that promises profound changes. It is about definitively burying what remains of the legacy of the dictatorship, which in the 1980s strictly applied the neoliberal policies of the Washington consensus. From that country forged in the heat of the ideas of the chicago boys a new one should emerge. At least that is what Boric has promised, and that is what his electorate will demand of him, who ask for more State in basic issues such as education and health, and more equality. The inauguration ceremony will be in Valparaíso, the coastal city that is hosting the Congress. Boric will then travel to Santiago, at the foot of the Andes mountain range, and at night he will go out on the balcony of La Moneda to give his first speech as president. The Chilean capital is preparing for a big party.

Boric will be sworn in as leader of an alliance of newly minted leftist parties and other traditional forces, such as the Communist Party, with the support of the Socialists. Her cabinet averages 49 years and is made up of a majority of women. They will be the ones who will outline the profile of the Government: feminist, promoter of sustainable development and, above all, closer to the people. “In Chile, neoliberalism was extreme and today it is trying to dismantle it in the same place where she was born. This country was not only the most neoliberal, it was also the first, even before the United States and the United Kingdom. The only country where the association between dictatorship and neoliberalism worked was in Chile”, says Carlos Ruiz, an academic at the University of Chile and a close relationship with the new president.

The challenge, of course, is enormous. Not only because the expectations of the street are very high. The start of the new Government also coincides with the work of a Convention that drafts a Constitution from scratch, an experience that has few precedents in the world. In Chile, says Ruiz, “there is a change in attitude towards the model and an ongoing deliberation.” “The figure of Boric embodies that new subjectivity, and he may finally be the leader of a new left, but whether that materializes will depend on the outcome of the Constituent process. The change will come if it is possible to remove one of the pillars of the model, which is the subsidiary State, that is, one that does not intervene in the things that it is considered that the private sector or the market can do”.

Boric arrives at La Moneda under the umbrella of the 1980 Constitution, drafted during a dictatorship, and will leave him with another. The change will force him to redesign the institutional structure of the country starting in the middle of this year, when the work of the Convention is scheduled to end and a referendum will be held. “Gabriel Boric’s success is linked to the success of the constituent process. If the new Constitution is narrowly approved or rejected, it would be a tremendous failure for the Government and for Chile,” warns Ignacio Briones, former Minister of Finance in the second government of Sebastián Piñera. For Leonidas Montes, director of the Center for Public Studies, the health of the economy will also be key. “During the second semester, Chile will have a significant slowdown, with more inflation along with demands for the State to continue distributing money, as was done during the pandemic. There will also be a shock from the war in Ukraine and the rise in oil prices.” To weather the storm, Boric has appointed Mario Marcel, former president of the Central Bank and one of the most respected economists in the country, both on the right and on the left, to the finance ministry.

In this scenario of uncertainty, Boric will have to satisfy old demands. He has in his favor the support of those who took to the streets in 2019 to ask for a new Chile. It is also at the forefront of the first generation of politicians that was born in a democracy and does not carry the weight of the fear of an authoritarian regression, the specter that has hovered over much of the democratic transition since 1990. “The great criticism of these groups is that in Chile there was no transition, that the Coalition was a farce and that it continued with the Pinochet Constitution. They embody the transition”, says Leónidas Montes. The political environment is one of the proximity of a peaceful revolution.

“Chile had three revolutions in 16 years (1964-1980): the revolution in freedom of Eduardo Frei Montalva, the socialist revolution of Salvador Allende and the capitalist revolution of Augusto Pinochet and the chicago boys. And the country did not resist it,” warns former Christian Democrat senator Ignacio Walker. For this reason, says Walker, “it is to be hoped that it will be understood that governments are not starting from scratch and that they have to seek a balance of continuity and change.” “That is the logic of gradualist reformism, which is typical of democracy,” says Walker, foreign minister during the government of Ricardo Lagos.

Jorge Arrate, one of the historical faces of socialist renewal and today close to the intellectuals of the Boric Government, defines the current moment as one of “innovation and political imagination.” And, like Walker, he assures that there have been phenomena of this type in the last century in Chile: “There were three popular fronts in the thirties of the last century that triumphed in the world and one of them was the Chilean. Then there was a unique alliance between socialists and communists, which did not occur in the rest of the world”, and mentions the governments of Frei and Allende and the subsequent “modernization of the dictatorship”, which he calls “a unique and monstrous graft between extreme economic freedom and extreme dictatorial brutality”.

Can Boric’s wave be replicated in other leftist processes in Latin America? Arrate considers that what happens in Chile could “project ideas, experiences and effects on the rest of the region”, above all because it has at least three fundamental elements that could be replicated: the generational change, its feminist emphasis and, the main one, the convergence of the left.

Boric himself has distanced himself from the Bolivarian revolution in Venezuela and Nicaraguan Daniel Ortega. He prefers to see himself in the mirror of the Brazilian Luiz Inácio Lula da Silva and is enthusiastic about the Colombian Gustavo Petro, a pre-candidate for president in his country. Arrate, however, says that the Boric administration will be less ideological than other previous processes. And he describes the peculiarities of the Chilean project: “It is characterized by the fact that it is an effort to merge, in a single perspective, the idea of ​​a fairer and more egalitarian society –socialist–, with the perspectives of feminism and environmentalism. The result of that is a program of profound transformation.”

Subscribe here to the EL PAÍS América newsletter and receive all the current regulatory keys in the region.