France seals its friendship with Algeria after a year of

France seals its friendship with Algeria after a year of crisis | International
is the headline of the news that the author of WTM News has collected this article. Stay tuned to WTM News to stay up to date with the latest news on this topic. We ask you to follow us on social networks. 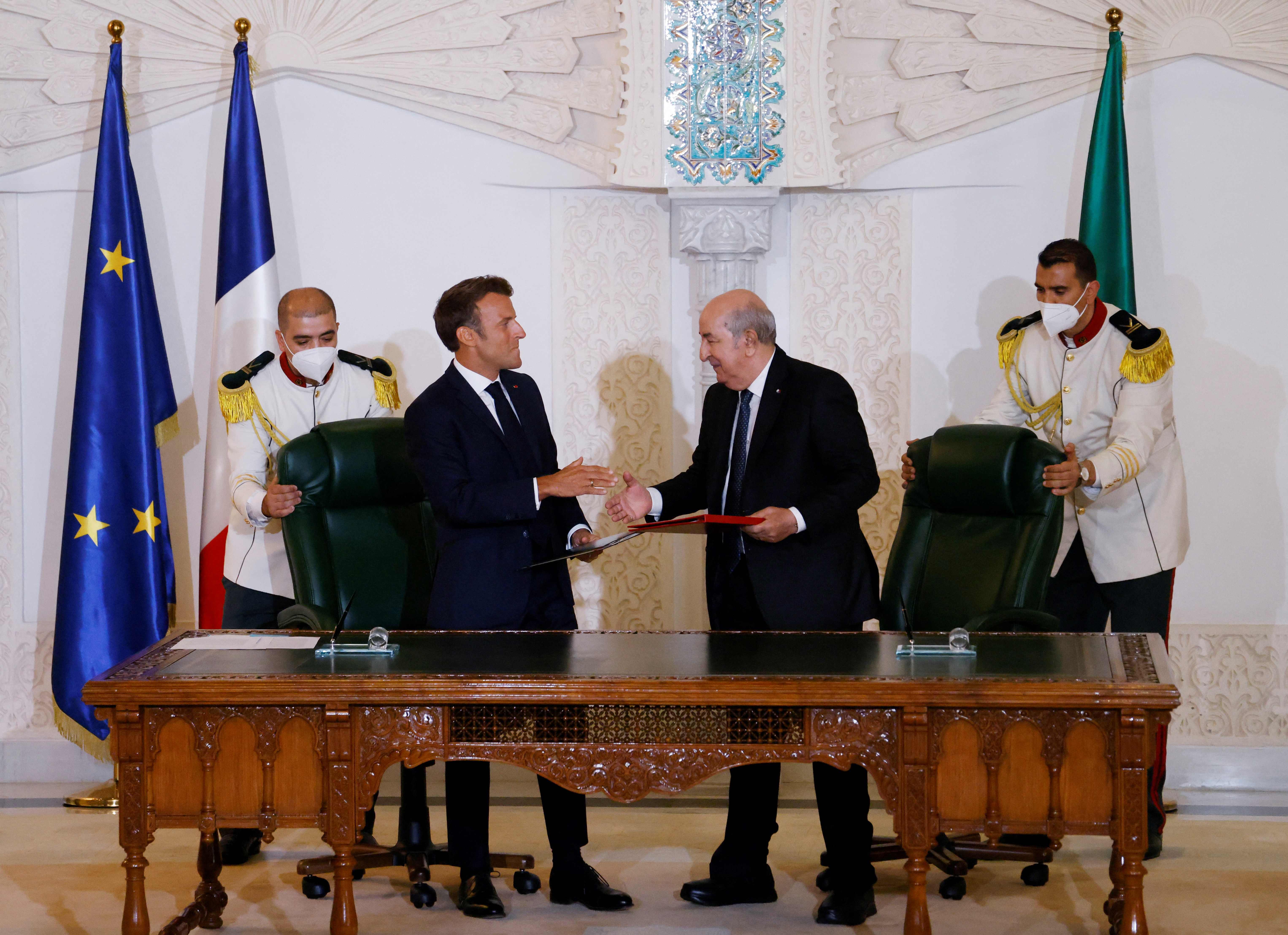 Emmanuel Macron has not hidden his “enthusiasm” and “emotion” during the three days of his visit to Algeria, the country of origin of millions of residents in France and a former French colony that, exactly 60 years ago, became independent after a war. , whose wounds have never fully closed. The French president and his Algerian counterpart, Abdelmayid Tebún, agreed on Saturday a series of measures to strengthen a relationship that less than a year ago entered into crisis precisely due to differences over the interpretation of the common past and the migration policy of the French government.

Macron made an unforeseen stopover in Algiers on Saturday – he was in Oran, the country’s second city, from where he had to return directly to Paris – to sign, together with Tebun, the Declaration of Algiers for a renewed Association between France and Algeria. The ceremony concluded a trip in which the French president has managed to advance what he calls “the reconciliation of memories”; and to point out, at a time of global instability and geopolitical struggle in the Mediterranean and North Africa, that France considers Algeria a “privileged partner”.

“We have agreed on the future, which affects us both”, Tebún declared in the final appearance with Macron. And he added: “We will act together in many fields outside of Algeria and France, in the interest of Africa, which we always defend”. Macron agreed: “We have lived with you, these last few days, strong, exciting moments, in which I believe, like you, that we have built the foundations of what is now beginning.”

Between Thursday and Saturday, both leaders have met five times, one of them accompanied by two heads of the General Staff of the Armies and by the heads of security. It had never happened since independence in 1962. Macron has also held meetings with young Algerians and on Saturday, in Oran, he had lunch with the writer Kamel Daoud and visited the old Disco Maghreb record store,

The final communiqué is based on the finding that “the time has come to favor an objective and true reading of a part of [la] common history that takes into account its stages to approach the future calmly and with mutual respect”. One of the triggers of the crisis, which at the end of 2021 led Algeria to withdraw its ambassador from Paris and close the airspace to French military planes flying to Mali, was Macron’s criticism of what he calls “investment revenues”. memory” used by the Algerian regime.

France and Algeria also conspire in the document to “value their belonging to the same Mediterranean geographical space, their political convergences and their economic complementarities to build a strategic relationship based on mutual trust and renewed dialogue” . The statement provides for the creation of a High Cooperation Council that will bring together the two heads of state every two years. It also establishes a commission of Franco-Algerian historians with access to the “all the archives” of both countries to address colonial history and the war of independence.

The visit has not resolved the dispute over the 50% reduction in visas for Algerian visitors to France, which was another trigger for the crisis. The declaration promotes the circulation between the two countries of students, businessmen, scientists, artists and university students, but Macron wants that, in parallel, control over undocumented immigrants be strengthened. The text, although it does not mention the supply of Algerian gas in the face of the threat of Russian cuts, cites “cooperation in the fields of gas and hydrogen.” The French president said on Friday that France did not need Algerian gas now, but it could be useful for other European countries. He cited Italy, connected by gas pipeline with Algeria. Regarding the accusations of human rights violations in this country, he affirmed that he had spoken “with great freedom and in an integral manner” with Tebún, but that “he did not [le correspondía] meddling in Algerian politics.

The emphatic reconciliation between France and Algeria threatens to provoke misgivings in Morocco, the third vertex of a triangle in which Paris always tries to maintain a balance. It also highlights, by contrast, the cooling of the relationship between Spain and Algeria since, in an abrupt diplomatic turn, it approached the Moroccan position on Western Sahara, a position opposed to the Algerian one.

One of Macron’s messages during the visit is that, after France’s withdrawal from its anti-terrorist mission in Mali, “Algeria has a totally key role in the Sahel, geographically and politically.”

Another message launched on Russia, a country linked to Algeria since independence and today increasingly active in the Mediterranean. The French president would like Algiers to join the camp of those who support Ukraine in the face of the invasion. “The Algerian nation,” he said Friday in statements to the press, “was built against colonialism and imperialism, and the war in Ukraine is a war of a colonial and imperial power, which is going to invade a neighbor. So, from this syllogism, he drew a simple conclusion: the Algerian people can only be against a colonial war that consists in invading a sovereign State and in violating its sovereignty and territorial integrity”.