Fears of poisoning hang over Istanbul meeting for Ukraine ceasefire

Fears of poisoning hang over Istanbul meeting for Ukraine ceasefire | International
is the headline of the news that the author of WTM News has collected this article. Stay tuned to WTM News to stay up to date with the latest news on this topic. We ask you to follow us on social networks. 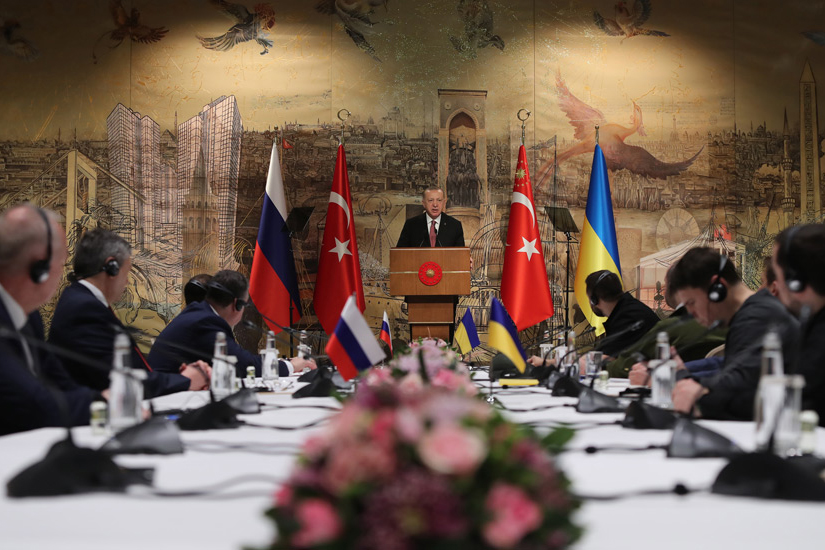 An uncomfortable fear hovered over Tuesday’s meeting between the Russian and Ukrainian delegations in Istanbul: the specter of poisoning. On the eve of the negotiations, the American newspaper The Wall Street Journal published that the Russian oligarch Roman Abramóvich and at least two members of the Ukrainian negotiating team, of whom he only cited the Ukrainian deputy of Tatar ethnicity Rustem Umerov, would have suffered symptoms compatible with poisoning at the beginning of the month, from which they later recovered. Also the Bellingcat collective, which has investigated several cases of poisoning of Russian dissidents, stated that it had been contacted by members of the Ukrainian delegation to seek experts who would certify what happened, which the investigative group attributes to a chemical agent.

The meeting in Turkey was held in the office owned by President Recep Tayyip Erdogan in the Istanbul neighborhood of Besiktas. There, the Turkish president acted as host and welcomed his guests, whom he urged to find a way out of the conflict. However, and although he removed his mask to receive them, he did not shake hands with any of them. In an interview with Ukraina 24 television, the head of Ukrainian diplomacy, Dmitro Kuleba, had said: “I recommend anyone who negotiates with the Russian Federation not to eat or drink anything, and to avoid touching any surface.” In the few images that have emerged from the negotiating table at the beginning of the meeting, only bottles of water from a Turkish brand are seen, closed, in front of the participants.

Following the publication of the alleged poisoning, parties have been quick to deny it, including a US intelligence source who told Reuters, he attributed it to “environmental factors.” Christo Grozev, one of the researchers at bellingcatattributes it to the fact that everything happens during “a period of negotiations” and neither party wants them to derail, even less after the first significant advances were registered this Tuesday.

The sources cited by TheWall Street Journal, Close to the victims of the incident, they attribute the alleged poisoning to an attempt by radical factions within the Russian state that sought to scare the negotiators and hinder the process. Not in vain, Abramóvich and Umerov had opened a path of negotiation, parallel to that of the official negotiating teams, with contacts in kyiv, Lviv, Warsaw and Istanbul, in which Ibrahim Kalin, presidential spokesman and adviser, has also played an important role. of President Erdogan on issues of national security and foreign policy.

The alleged poisoning occurred on the night of March 3 to 4, during negotiations that took place on the territory of Ukraine. In them, according to the investigation of bellingcat, Abramóvich, Umerov, another Russian businessman and several Ukrainian representatives participated. They only consumed chocolate bars and water, but when they retired to an apartment in kyiv at the end of the meeting they began to suffer from eye and skin inflammation, symptoms “compatible with poisoning by chemical weapons”. According TheWall Street Journal, Abramovich lost his vision for several hours and had trouble eating afterwards. The next day, the negotiators left for the Ukrainian town of Lviv, then to Poland and from there to Istanbul, where Abramovich was treated.

“According to two chemical weapons experts and a doctor consulted, the symptoms are compatible with variants of porphyrin, organophosphates or bicyclic substances. It could not be definitively determined due to the lack of specialized laboratory equipment near the victims,” he explained. bellingcat on Twitter, in a thread of tweets in which he also added that “the amount and type of toxins” used “would not be enough to cause fatal damage”, concluding that the objective was to “scare” the negotiators.

We tested the new iPhone SE: a manageable mobile with a screen with gigantic frames | Your Technology | The country