Aura Garrido: “‘Malnazidos’ is like ‘Inglourious Basterds’, it’s not a war movie or a social drama, it’s an adventure”

Aura Garrido Malnazidos is like Inglourious Basterds its not a

This March 11, ‘Malnazidos’ arrives in Spanish cinemas, an action adventure, zombies and civil war directed by Javier Ruiz Caldera and Alberto de Toro. On the occasion of its premiere we sat down to chat with six of its protagonists: Miki Esparbé, Álvaro Cervantes, Aura Garrido, María Botto, Luis Callejo and Manel Llunell who told us, among other things, about the historical context of the film and what they like the most. of his characters. “It was something I hadn’t done before”Garrido tells us, “an aunt who, faced with such an extreme situation and in a world of men, is facing them face to face and wields all weapons, takes more than anyone”.

What most interested Cervantes about Mecha, the Republican he plays, was “his bad host and above all that he did not stay in a superficial thing, that it was understood why he had that wound and that rage. It seemed interesting to me that on the one hand that bad host, worked as comic relief at times but then it really came from a deep and hard place, because in the end they are in a war and what he lived through and what is told is the worst thing that can happen to you”. You can watch the full interview below:

And the fact is that the cast is great, because in addition to the 6 aforementioned performers they are accompanied on screen by Jesús Carroza, Manuel Morón, Mouad Ghazouan, Francisco Reyes or Dafnis Balduz. A lot of people, but who according to themselves, formed a good team as a gear that fits perfectly: “The memory I have of the filming is of something very dynamic”says Bott, “It’s something that doesn’t usually happen. Since we were all together and we were shooting at night, we were much more relaxed because we were exhausted. But I have the feeling that we were doing a puzzle.”

As we commented in our review, ‘Malnazidos’ is committed to giving an equidistant approach to the Spanish civil war and the differences between republicans and fascists. Were its protagonists worried about how the public would receive this proposal? “This context was taken as an excuse to be able to place something totally utopian and remote, which are zombies”Esparbé tells us, “We trusted that it would be understood from there, it is a fantastic movie, if we wanted we could have made a realistic movie”. On the other set we asked the same question and Garrido compared ‘Malnazidos’ to a well-known Quentin Tarantino movie: “It’s like ‘Inglourious Basterds,’ which isn’t a war movie or a social drama, it’s an adventure movie”; idea that Cervantes pointed out by adding that “A microcosm is created, a particular universe of this atypical band that is what is above and leads you to tell this great story of adventures of which we are all very proud”. 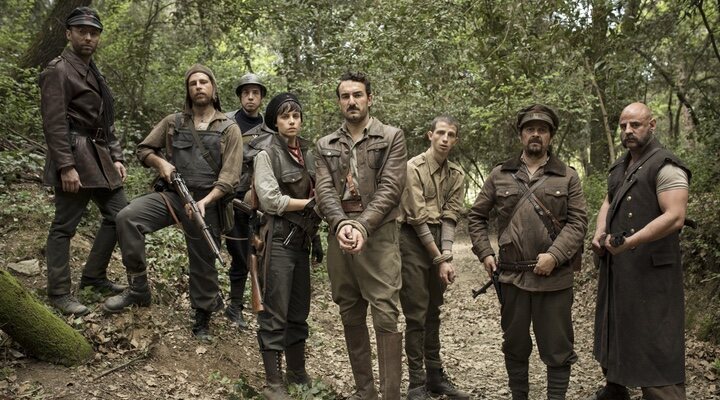 Starring in a zombie movie is all well and good, but how would they survive a true undead apocalypse? How much do you know about genre cinema? We have subjected the six of them to a very peculiar test to know, first, where they would choose to spend the invasion, in a shopping center like in ‘Dawn of the Dead’? better in a bar like ‘Zombies party’? Or would they have more opportunities at an amusement park like in ‘Welcome to Zombieland’?

We also put them in the position of choosing between three weapons to go looking for provisions: A lawnmower in the purest style ‘Braindead (Your mother has eaten my dog)’, his own body handing out chestnuts like Milla Jovovich in ‘Resident Evil’ or with a chainsaw (Ash in ‘The Dead of Hell 2: Scary Dead’ did quite well). We leave you with his answers while you think about yours:

To know our present, you have to know about history, so we also asked why it is considered the first zombie movie in the cinema and we put them in two moral dilemmas: What do you do if they end up biting you and how would you deal with the rights of the non-living if there was a slight chance of a cure? In a real infected world, we don’t know how long Esparbé, Cervantes, Garrido, Botto, Calleja and Llunell would last, worse to find out how he does in fiction you’ll have to go to theaters to see ‘Malnazidos’, which is already in theaters.

What is cryptocurrency farming